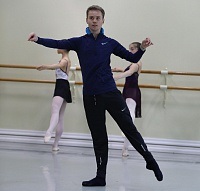 Leonid Sarafanov is one of the biggest stars of the moment. Globally acclaimed by the public and critics.

In 2000 Leonid graduated from Kiev State Academy of Choreography and entered as a soloist the National Ballet of Ukraine. After that he began his work at the Mikhailovsky Theater where he is currently the principal star.